Tonight at the Festival there were three one act plays, the first being ‘Ivy’ by James Hogan and performed by The Legion Players.

Stephanie Gray played Ivy, a chatty lady who has worked at a hotel for the past forty years as a barmaid. She’d been replaced by a ‘Teenage Tart’. Howard Caine played Inky, Ivy’s best friend and fellow hotel worker. The play opened with Inky in a cluttered room filled with boxes and wearing a dishevelled suit and tie. When Ivy enters, it breaks the silence in which Inky has been in going about his morning routine. She chats to him about being forced to retire, with Stephanie using the audience space well to convey her dissatisfaction at having to “pack up and go” because of “Little Miss Button-Missing.”

Both characters conveyed their relationship to one another well, with Howard using great facial expressions to portray his annoyance at being disturbed from reading the newspaper in peace, occasionally asking, “When’s your bus?” Ivy’s eagerness for Inky to stop his betting habits came across strongly, saying poignant lines such as “You can’t buy luck.” She then tosses all of the newspapers and betting slips off the table in anger. Just as Inky was about to leave, there was a strong contrast where Ivy appeared sorry for what she did, during which he returned.

There were lots of really nice emotionally charged moments, such as when Ivy explained how she worked her way up in the hotel business, and waited for her ex-partner, Nobby, to return. She read his postcard with longing and Inky was visibly uncomfortable. There were lots of funny lines between the two characters and overall it was an enjoyable piece with careful attention to levels of staging and direction. 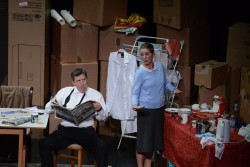 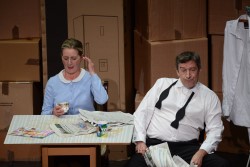 ‘Mother Figure’ from ‘Confusions’ by Alan Ayckbourn was performed by Broadway Theatre Company.

This play was set in a living room covered with children’s toys and laundry in piles, with Laura Jones playing the mother figure, Lucy. She had many funny moments from the beginning, shouting up to her children in bed as she walked on and offstage. Her neighbour, Rosemary (played by Kate Cowley) entered with a keenness to know why Lucy’s husband has been trying to call her at home with no reply. Both actresses portrayed their characters favourably and were brought even more to life when Rosemary’s husband, Terry (played by Matt Quinn) made his way into the house.

It’s obvious that Rosemary let her husband wear the trousers in their marriage, to which Lucy helped her take back from him by the end of the play by mocking him taking control of the situation – “don’t give him the keys, Rosemary! He’s got to apologise.” The act continues to progress into a mother looking after two children, as they fight over a cup of orange juice and Rosemary cheered up by “Mr Poddle” the stuffed toy was definitely a highlight.

Overall, the play was well-timed, packed full of comedic value and we felt as tired as Lucy by the time the couple left, but also proud that she has left her estranged husband to fend for herself and her children without his help. 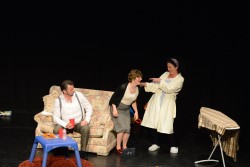 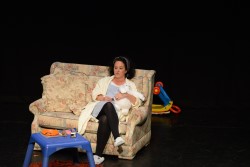 The final play of the night was ‘A Cream Cracker Under the Settee’ by Alan Bennett and performed by the Rushen Players.

Doris, played by Pat Clewis, connected almost immediately with her audience, explaining to us why she didn’t want to be taken to a care home. She addressed her deceased husband, Wilfred, to a photo of him as she thought aloud about her lousy cleaner and how she wasn’t allowed to use a Ewbank.

Pat was able to convey to the audience her sense of frustration about being unable to get back up off the floor after dusting her wedding photo, which she clutched the whole time beside her and frequently talked to as “Wilfred.” She delivered many funny lines but one of the highlights was when she found the cream cracker under the settee and wanted to send it to the cleaners’ boss “for health and safety.”

Ultimately, the play was about loneliness and we felt for Doris as she spent hours in the dark on the floor looking back at her time in the house she shared with Wilfred. There were many touching moments when she spoke about now knowing anyone living around her except the policeman, who eventually came to the door to see if she was ok, but her pride got the better of her and she didn’t call for help. There was good use of sound effects and lighting in this scene and we really wanted to help her to the door to get help. Doris had a good mixture of funny and sad lines delivered by Pat with real feeling, making her seem even more vulnerable when she referred back to her wedding photo with longing to be with her husband again. 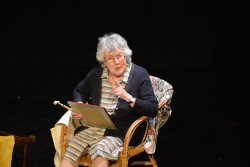 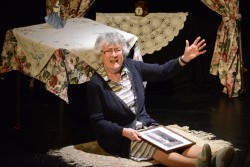