Benefactors – a thought-provoking tale of sub-urban domestic upheaval…
The fourth night of the Easter Festival of Plays brought some classic modern drama to the Gaiety Theatre with Benefactors presented by Bejou Productions from Westcliff on Sea. The performance was given in memory of Bejou Productions’ co-founder John White – a long-standing supporter of the Easter Festival – who sadly passed away in December 2018.

Benefactors by Michael Frayn, written in 1984, is set in late 1960s London and concerns an idealistic architect David and his wife Jane, and their relationship(s) with their less-than-idealistic friends Colin and wife Sheila. The play focuses – at least superficially – on David’s plan to build two skyscrapers and the reactions of everybody around him, in the house and out, to his plans. However, as is the case with most of Frayn’s work, the meaning behind the action is anything but straight-forward. The subtext of the plot touches on the complexity of human relationships, the price of political and psychological change, and ends with David questioning his dreams for building a ‘better’ world and a shattered marriage for one of the couples.
The set was representative with imaginative use of music and lighting to set the tone. The action moved along at a good pace and each character was clearly identifiable. Adjudicator Jill Colby felt that the pace was even, although this was hindered by uncertainty of lines, and greater overlapping of scenes would have assisted in the movement of the action.

Each of the four actors gave strong performances and were praised by the adjudicator. David Streames – playing David (and who directed the production) – brought out the aloofness of his character whose focus on his project seems all-consuming. Joanna Mitchell – in the part of David’s wife Jane – was imaginative in her presentation and maintained the middle-class attitude throughout. Jacqui Schon – in the role of Shiela – played her part with sensitivity and had a good connection with the audience. Robb Stow – as Colin – was convincing in what is a purposefully unlikable and cynical character.

Jill Colby felt the director brought out the sense of domesticity and that there were moments when the play really shone. She also commented on the vocal energy which was brought by those involved to the production.
Overall, Bejou Productions presented a thought-provoking, witty-yet-dark performance of one of Michael Frayn’s lesser known plays. This cautionary tale of helping others was handled well and the final scene was particularly effective, leaving many in the audience with a real sense of reflection. 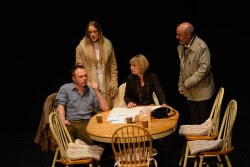 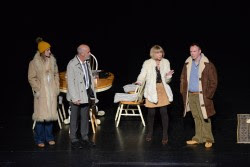 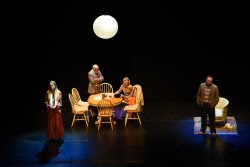 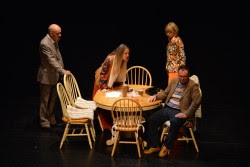 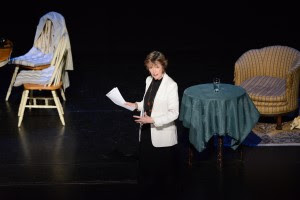